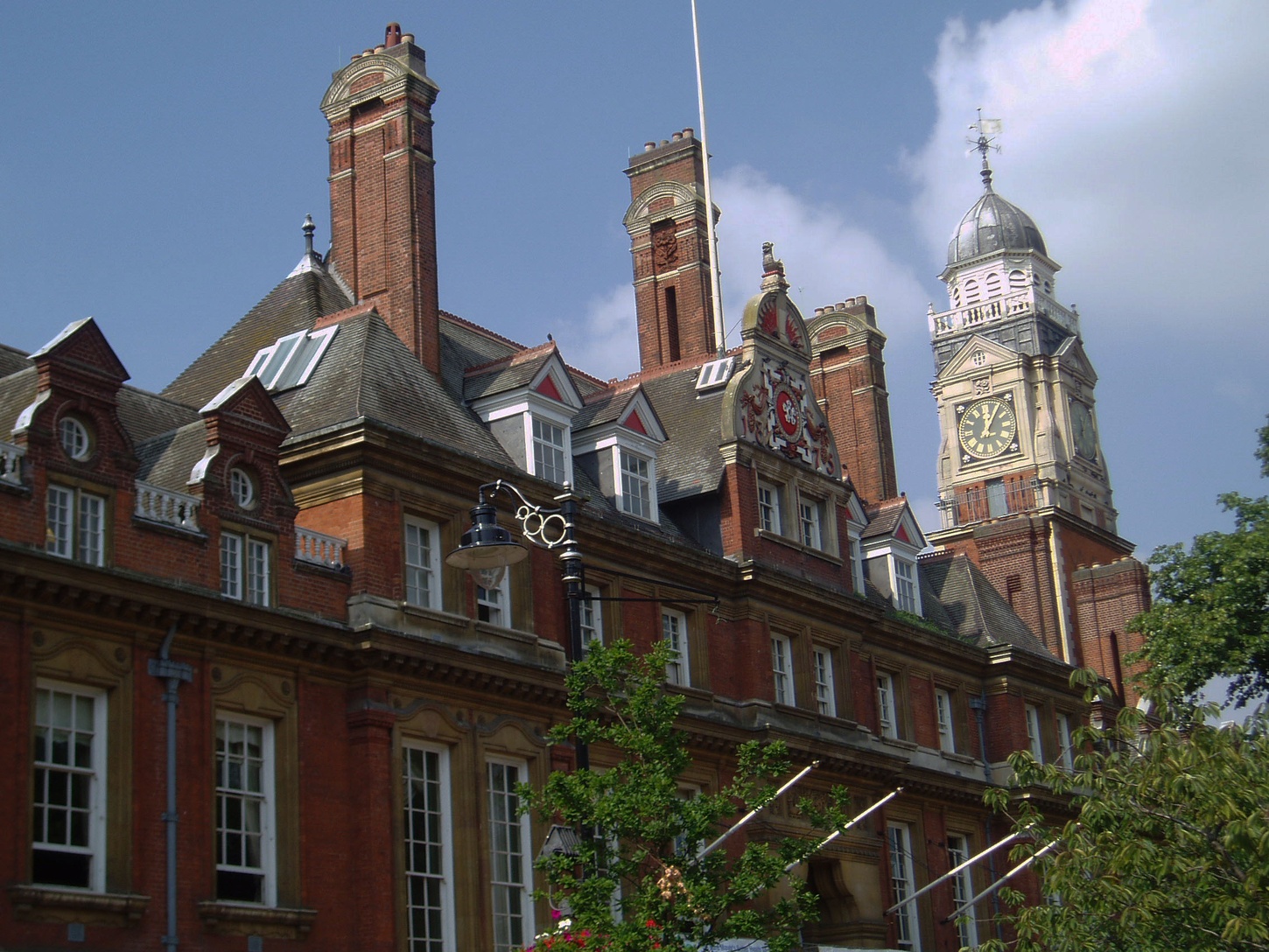 Are you looking for exceptional student accommodation in Leicester? Join the 45,000 strong student community in this vibrant Midlands city across De Montfort University and University of Leicester. With superb transport links, a thriving social scene and bustling social calendar happening on your doorstep, you’ll love living in the heart of the city while you’re studying in Leicester. 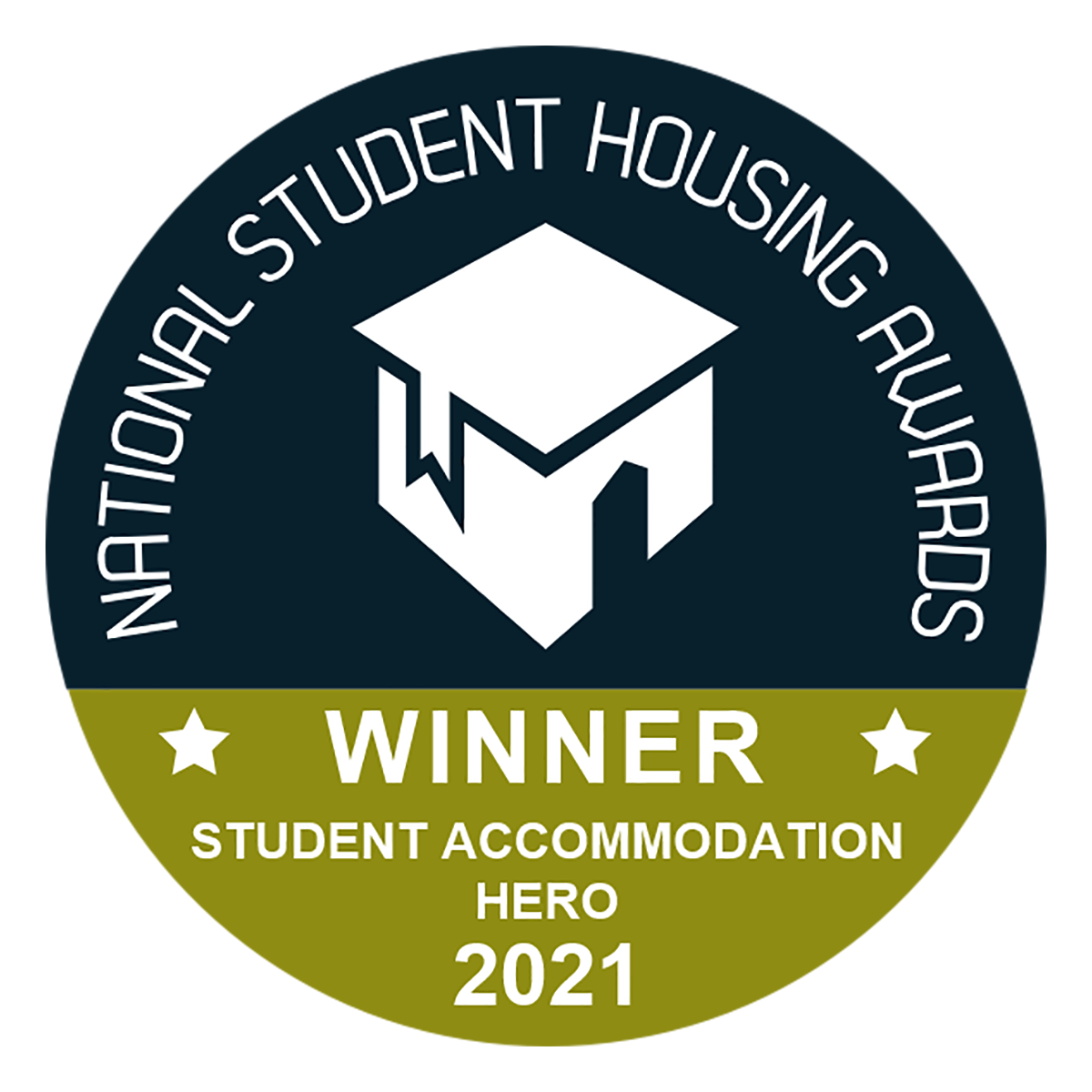 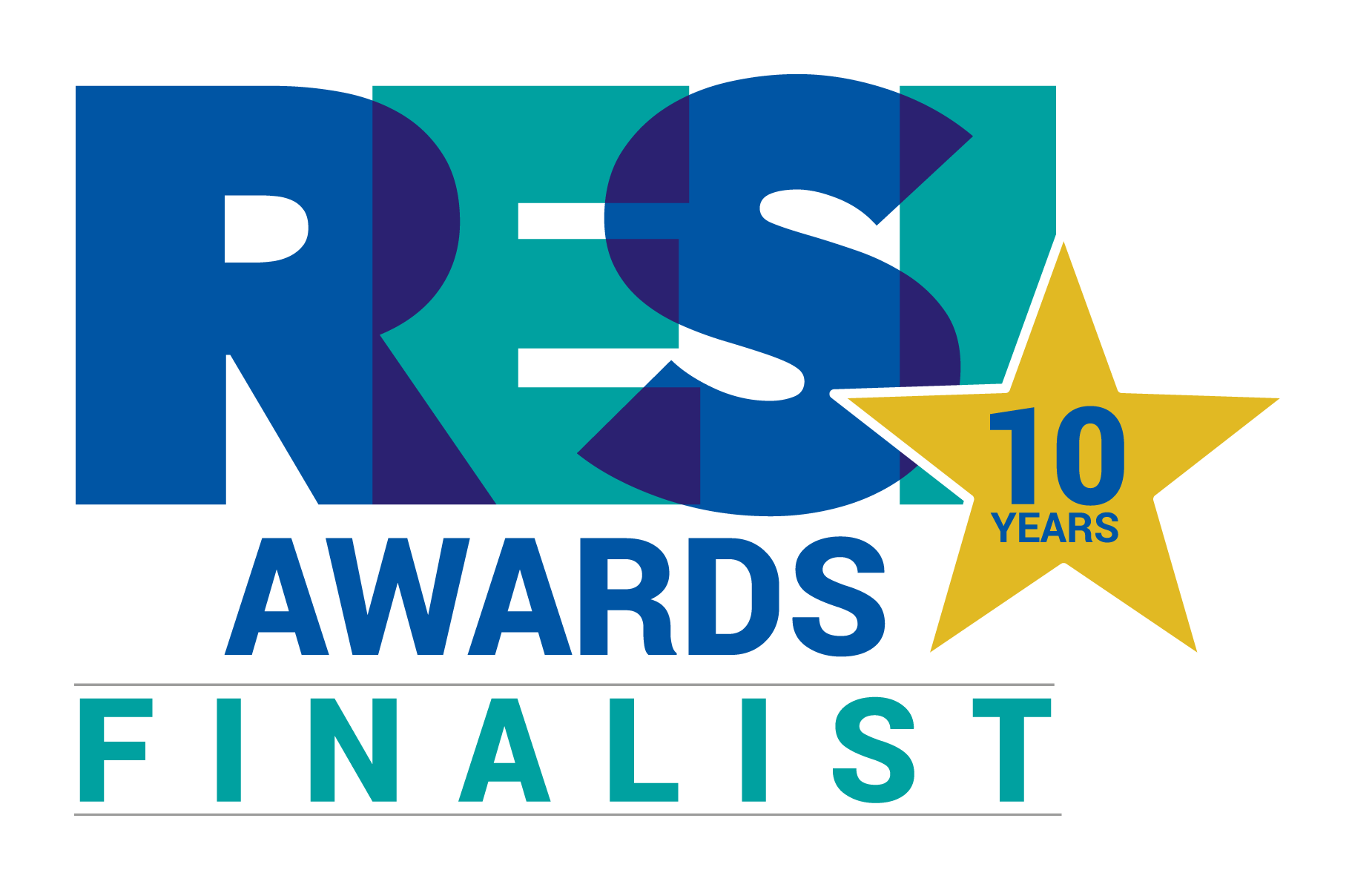 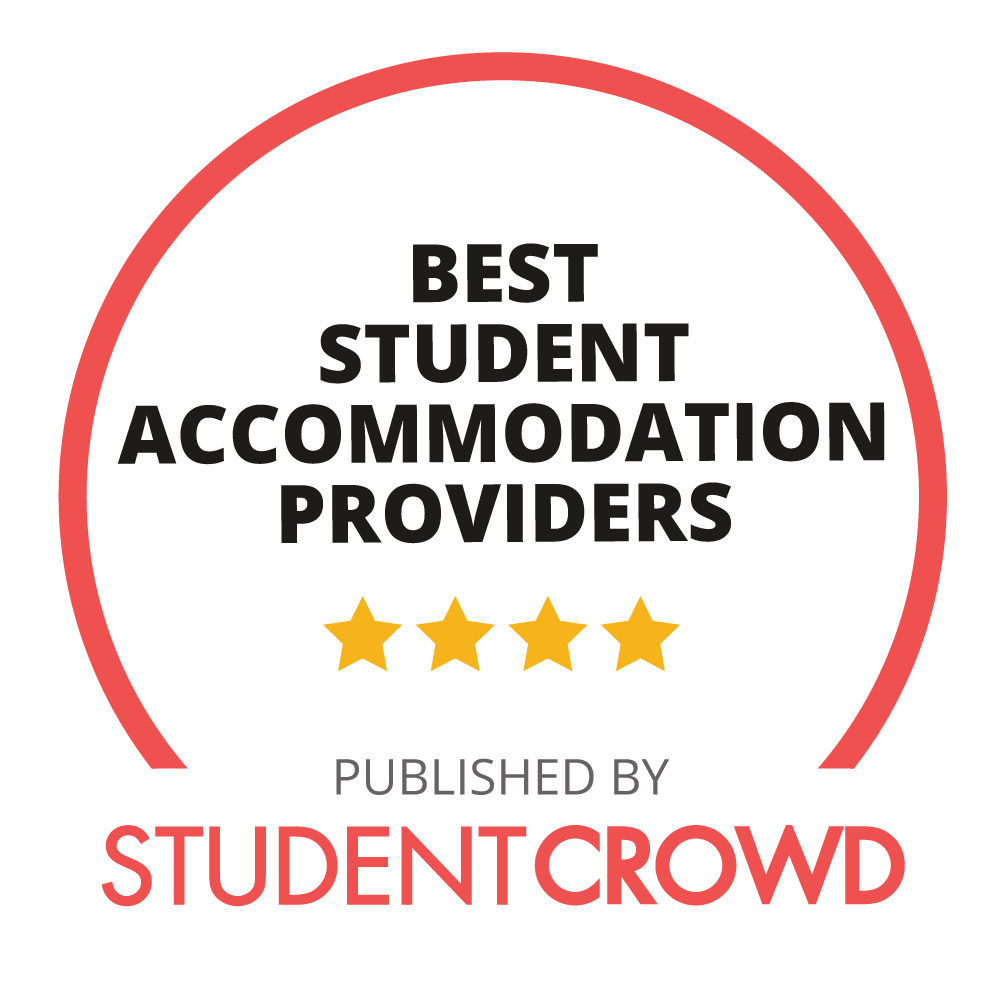 We offer risk-free booking. If you don’t get a visa or your uni place, you can cancel free of charge. 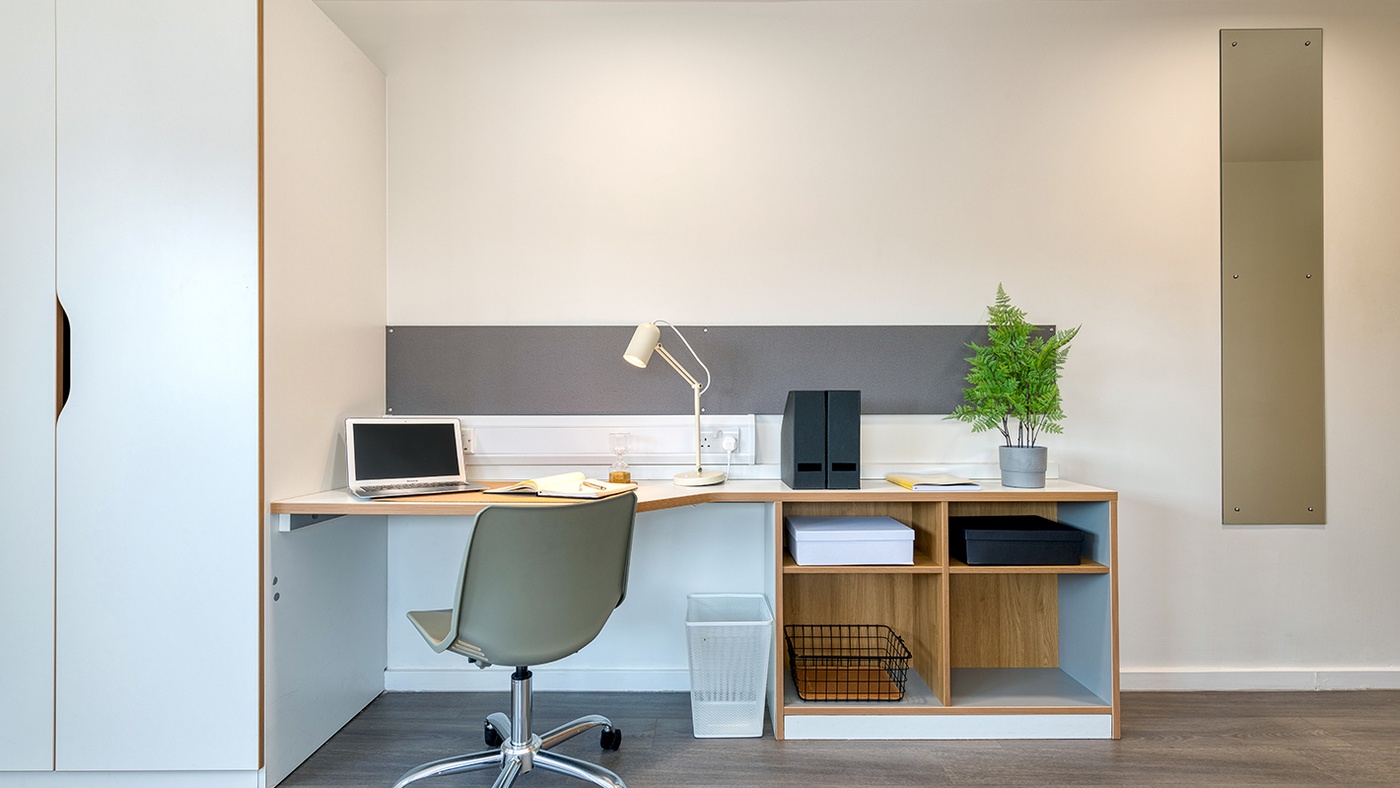 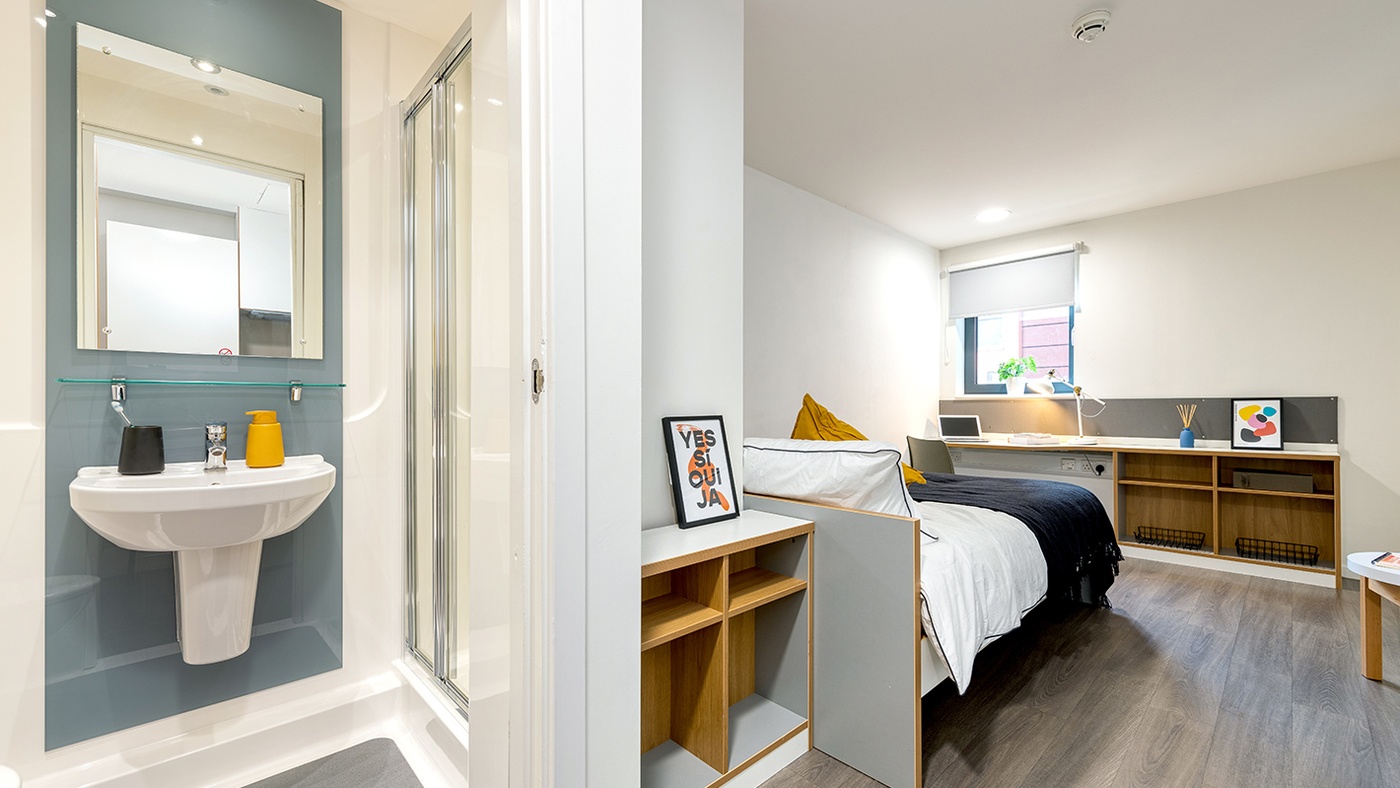 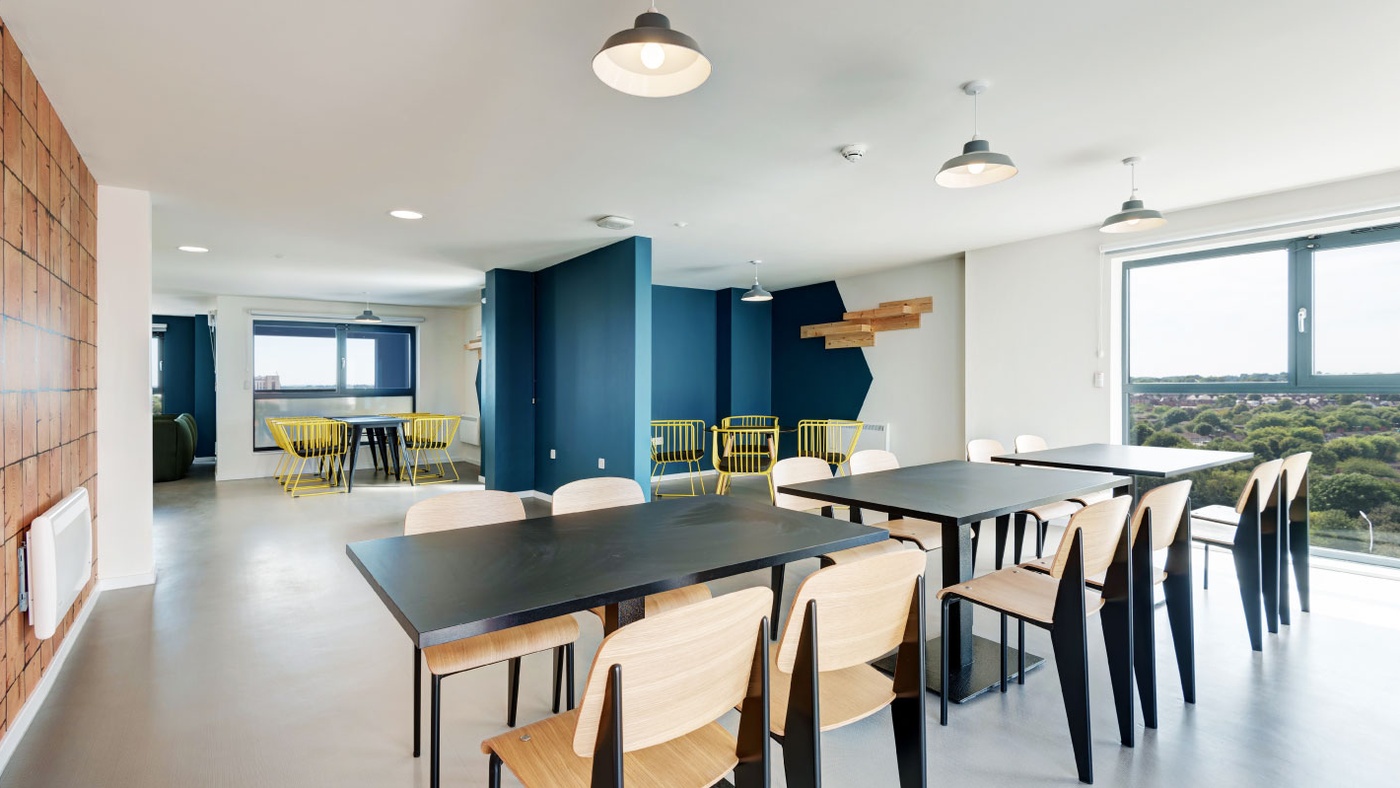 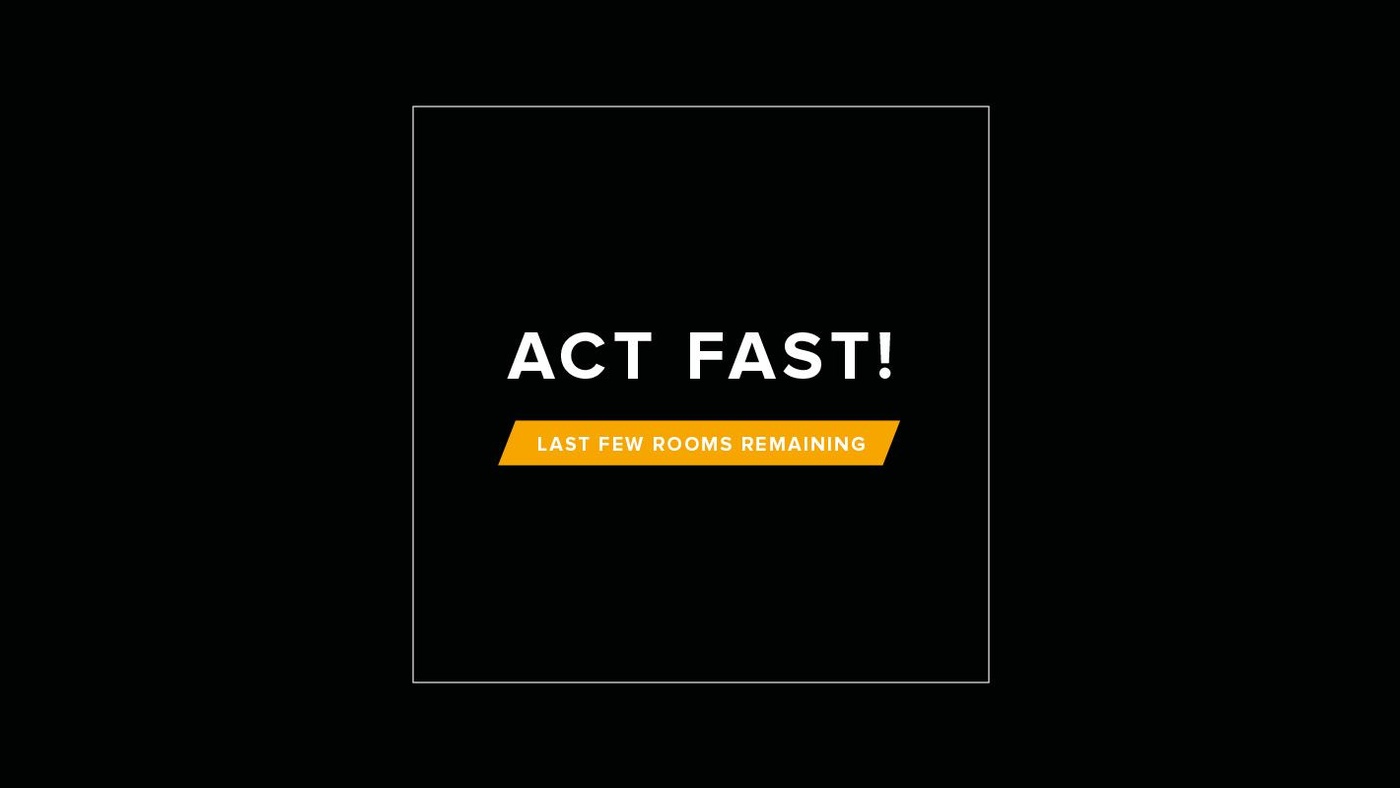 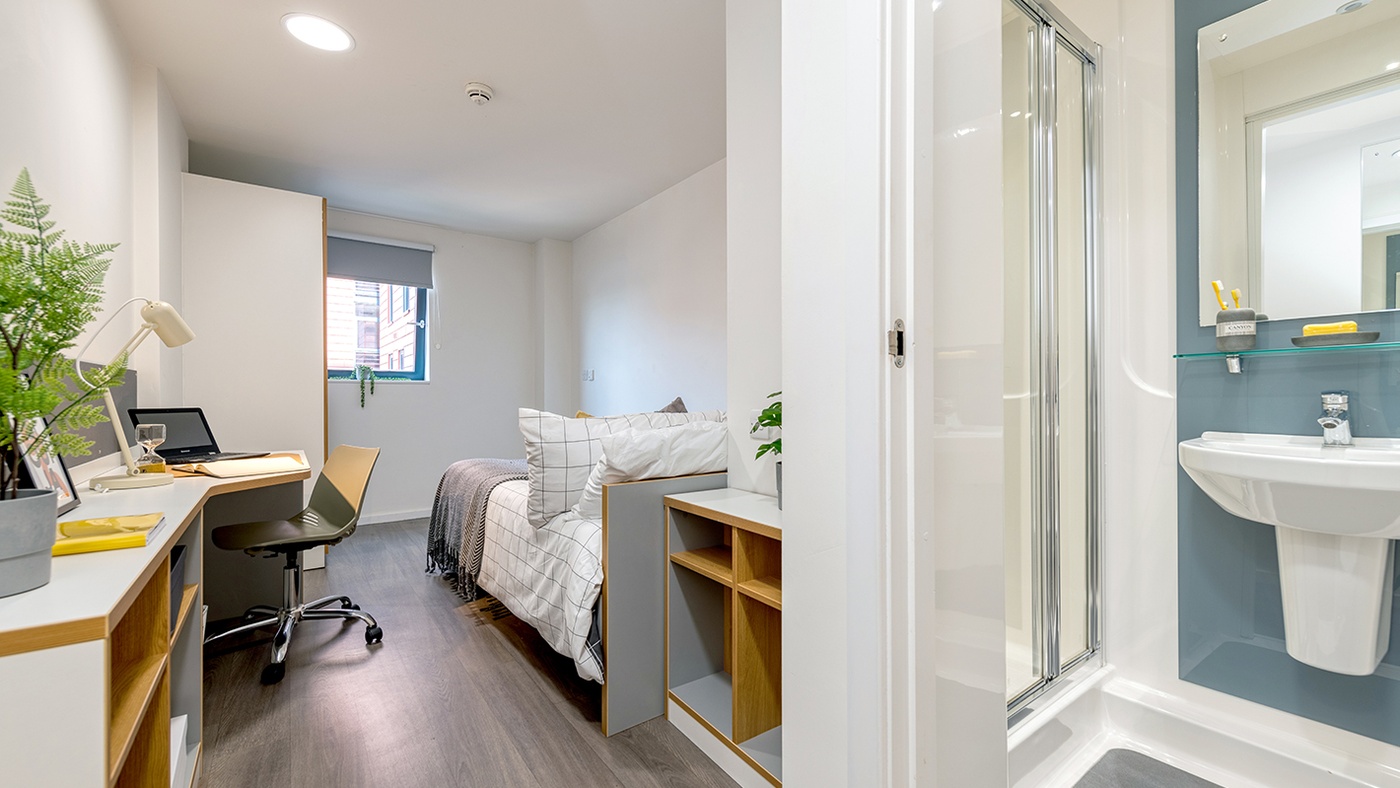 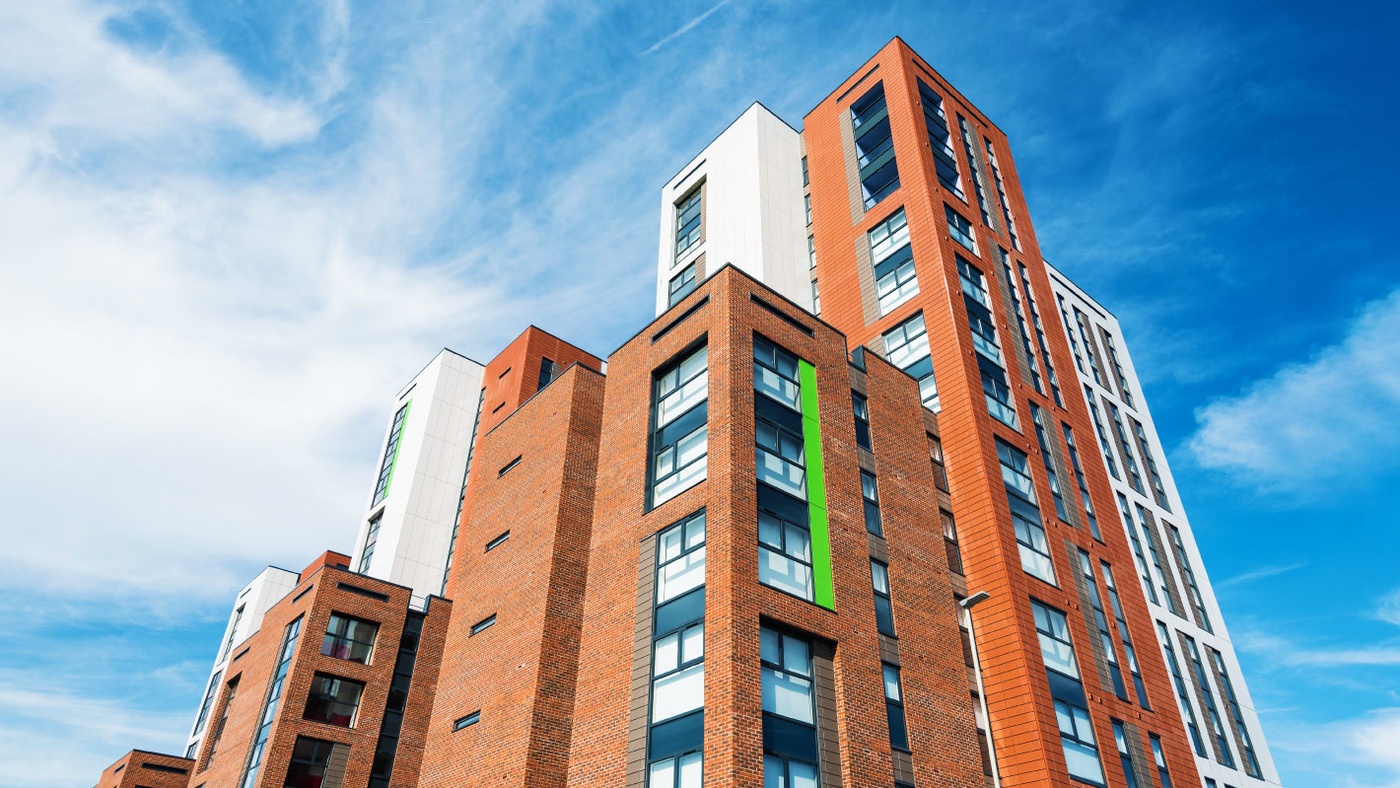 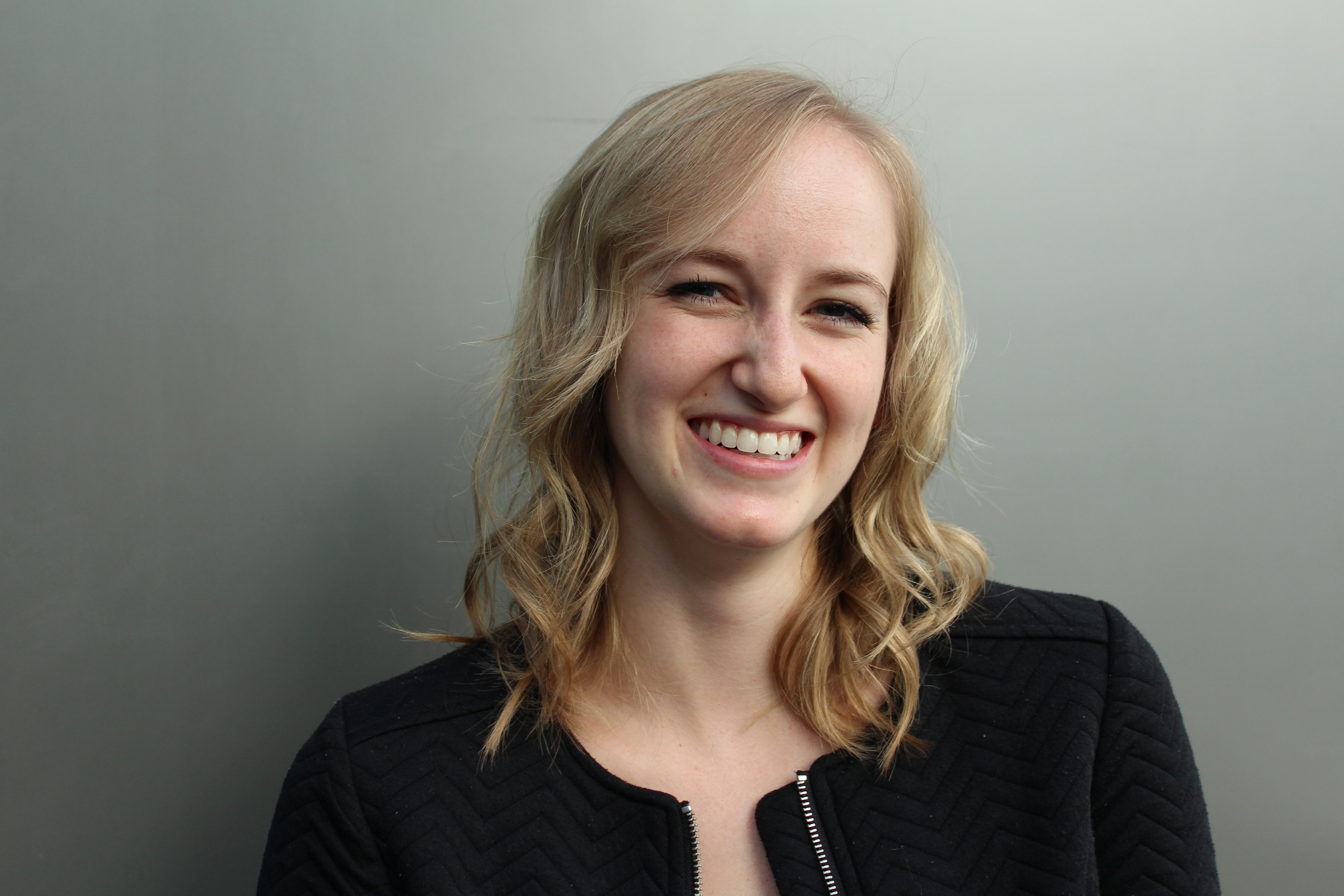 What Our Residents Say Keeleigh
As a first year student, I can't recommend Merlin Heights enough. Meeting friends has been so easy as well as settling in. The rooms are the perfect size and so cosy in the evenings. The staff are helpful and available to help and answer questions 24/7. Washing facilities are close to the blocks as well as the Sky Lounge and Games Room. I use the Sky Lounge most days to study when I'm not on campus. The best thing about staying here is that you're a five minute walk from the city centre, meaning there are bars and clubs close by. It's also under ten minutes to De Montfort University. Overall, I have had an amazing experience here!
From £129 per week
Summer For Free
View Property

Activities for Students in Leicester

Advice for Students in Leicester

Leicester is an exciting university city that benefits from a premium, central location that makes the potential to travel around England a breeze. As the UK’s tenth largest city, it’s suitably rich in cultural diversity, with something for everyone across a bustling social scene as live music is an integral part of the night life in Leicester. The food scene is thriving and you can explore a host of authentic world cuisines at any given time in the city.

When you’re ready for a study break, you have the best of the city on your doorstep. Step out of your student flat and take a short walk to the city centre for access to the best shops, bars, restaurants and markets, but also some truly wonderful and peaceful green spaces – with many easily accessible from our Leicester student accommodation. Leicester city centre benefits from a compact location with ample options for public transport but that’s easy to navigate and get around by foot or by bike.

Cycle or walk
You’ll find secure bike storage in our student accommodation in Leicester, as well as racks throughout the city centre including indoor storage at Leicester Town Hall with showers and changing facilities. Leicester City Council also offers a selection of free cycle maps to help you get around Leicester city and the surrounding areas.

Train
Leicester train station is just a 22 minute walk away on London Road. While it’s the only one you’ll find in the city, it has frequent links to neighbouring Midlands cities, local towns, and you can get to London St Pancras in just one hour.

Bus
Leicester has several bus routes through the city but generally speaking, it’s easier to walk because of one way systems across the city’s roads. Most bus services operate from the Haymarket or St. Margaret’s Bus Station including local and National Express coach services.

The city has a well-earned reputation for being a multicultural haven with a thriving social scene and exciting city centre, so there are so many exciting things for students to do in Leicester including lots of free attractions and plenty of parks and green spaces in Leicester for you to enjoy.

You’ll find high street staple restaurants like Wagamama, Turtle Bay and Bill’s near the Highcross shopping centre which are ideal for everything from leisurely breakfasts to  bottomless brunch in Leicester. The Lanes has a number of independent cafes and restaurants among little indie gift shops, and is just around the corner from St. Martin’s Square which features a number of foodie places and is a prime spot for outdoor seating in Leicester. The city is famed for being the best outside of India for curries, so you’d do well to head to any curry house on the Golden Mile on Belgrave Road or London Road.

There’s plenty of museums and galleries in Leicester for you to choose from in the city and New Walk area, which is conveniently placed to get to from De Montfort University. You’ll also find lots of guides online for self-guided historical tours of Leicester and its famous buildings and monuments, which is a great way to get to know the city.

If you’re currently considering studying in Leicester, then we definitely recommend attending open days at universities in Leicester. It’s a great opportunity for you to explore student life as it’s happening and the chance to explore the city.

Our general advice would always be to ensure you prioritise your wellbeing as well as studying, make use of the facilities and support services available to you, and try to apply yourself in everything you do. You’ll find more student advice from Collegiate across our website, and you can always feel free to speak to our teams at our student accommodation in Leicester. 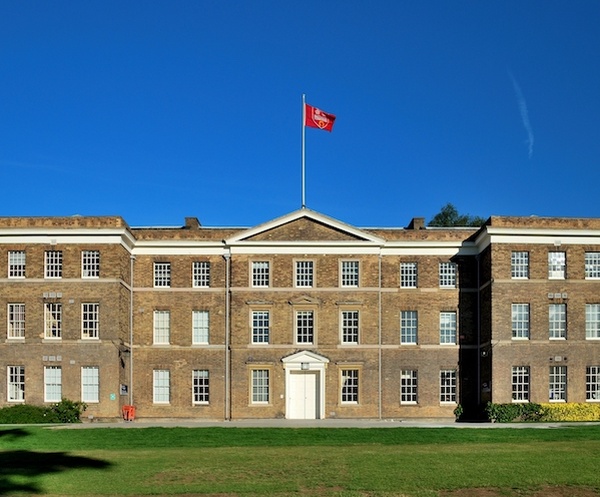 The University of Leicester is one of the UK’s leading research universities with excellent campus facilities and over 350 degree programmes. The Leicester University campus is based south of the city centre, near to Victoria Park and close to Leicester’s live music venue, the O2 Academy. 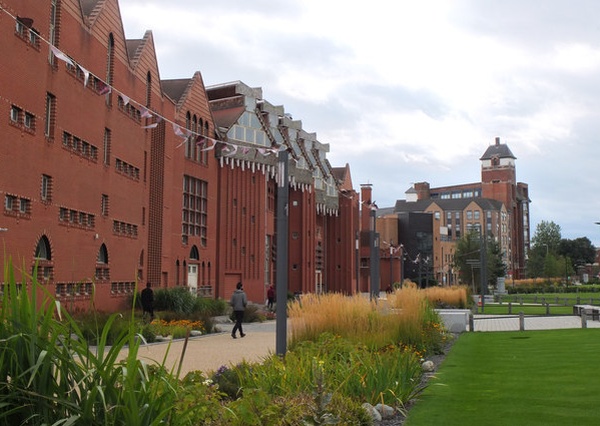 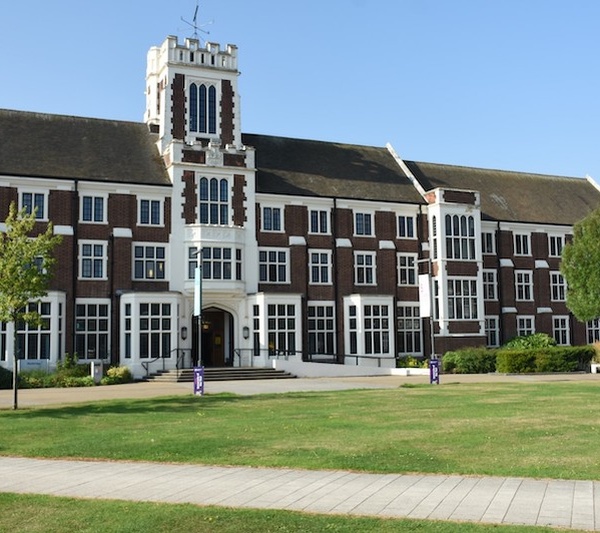 Just a 10 minute train ride from Leicester city centre, Loughborough University is well-known for its elite sports programme as well as high-performing engineering and technology courses. It has the largest single-site green campus in the UK, and consistently ranks highly for student experience.

Explore our quick FAQ guide to everything you need to know about living and studying in Leicester. If you can’t find the answer to your question here, get in touch with a member of our team from our student accommodation in Leicester, who’ll be happy to help.

​​How much does rent cost for students in Leicester?

How do I pay for my student room in Leicester?

You can make rent payments online using your credit or debit card via your Collegiate Portal account or by bank transfer. If you’d like to pay by bank transfer, contact your Accommodation Management Team .

How much money will I spend on bills as a student in Leicester?

On average, UK students spend £37 per month on bills. However, when you book with Collegiate student accommodation in Leicester, all electricity, gas, water, broadband bills are included with your room. You also get exclusive access to incredible features such as a sky lounge, a games room with table tennis, pool and table football as well as an Amazon locker and on-site laundry room for total convenience.

What are the best student areas in Leicester?

Our student accommodation in Leicester is well-connected to the city centre which is within a 5 minute walk away. There are plenty of buses to take you throughout Leicester and Leicester Rail Station is within 15 minutes walking distance. When you have some spare time, explore the nearby Highcross shopping centre and St. Martins Square or venture over to Narborough Road or London Road for bars, shops, restaurants and more.

Can I view my student flat in Leicester before booking?

Yes, we can offer both virtual and in-person viewings. Simply contact the Leicester student accommodation team to arrange a viewing.

What different types of student accommodation are available?

Our student accommodation in Leicester, Merlin Heights, benefits from a prime central location in the city with easy access to both De Montfort University and University of Leicester. We offer differing levels of private en-suite rooms in shared apartments as well as private studio spaces all fully equipped and designed for ease and comfort. Whatever you decide on, you’ll always benefit from en-suite facilities, a private study space and a kitchen area as well as all bills and Wi-Fi included in your weekly rent.

Are there free things for students to do in Leicester?

There are lots of free attractions and things to do in Leicester including the city’s library, museums, galleries and plenty of parks and green spaces for you to enjoy.

What shops are near my student accommodation in Leicester?

Leicester is well-known for its award-winning outdoor and indoor markets, and they’re less than a 15-minute walk away from our student accommodation. It’s the place to go for all manner of fresh produce and groceries, as well as fabric, clothing, essentials and bric-a-brac.

There’s also the Highcross centre which is packed with all the big high street names such as Zara, H&M and John Lewis, as well as the Haymarket shopping centre which leads you to Humberstone Gate where you’ll find even more shops.

In terms of convenience, you’ll benefit from a Londis supermarket on the ground floor of our student accommodation in Leicester as well as a Tesco supermarket about a 10-minute walk away, so you’ve got all bases covered.

What are some interesting facts about Leicester?

Leicester-born Henry Walker created one of the world’s most recognisable crisp brands and has kept it in the city for over 70 years.

Leicester’s annual Caribbean Carnival is said to be the second largest in the UK, just behind Notting Hill.

English was technically invented in Leicester – it’s thought that warring Anglo Saxons and Vikings set aside their differences long enough to establish a shared language that formed English as we know it now.

Which universities are local to Leicester?

University of Leicester is 1.6 miles away from Merlin Heights:

Find the perfect student studio in Leicester. Centrally located and close to universities. 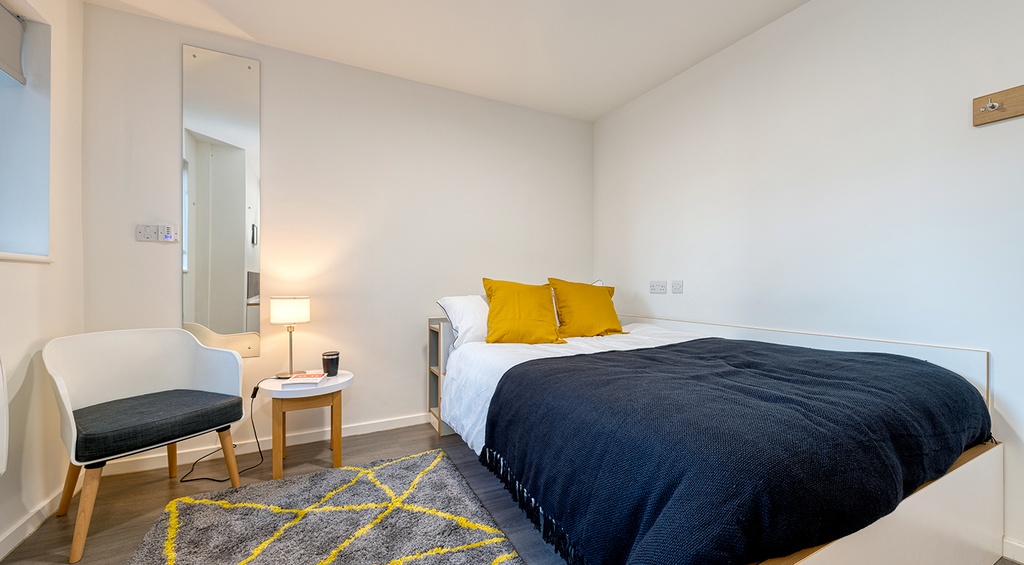 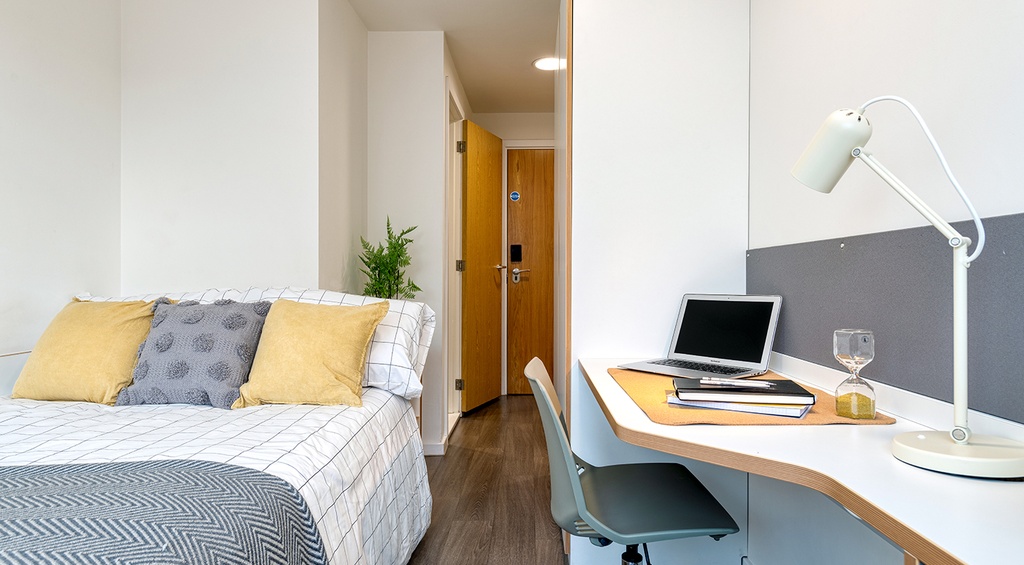 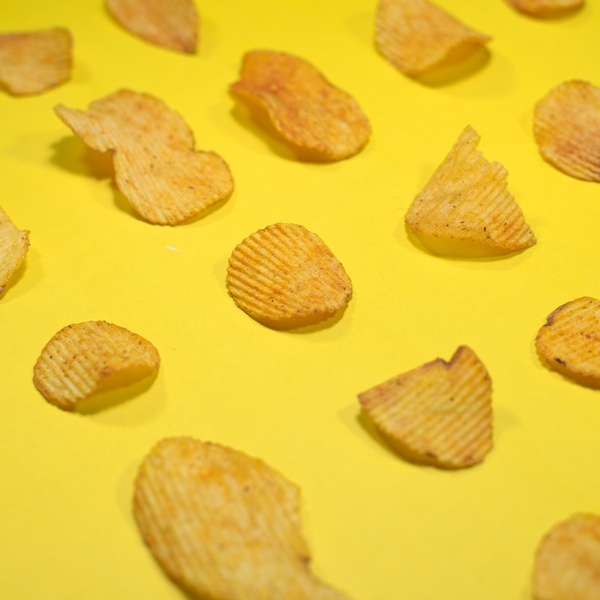 Studying in Leicester brings with it so many cultural treats – a thriving foodie and music ...
Read Article 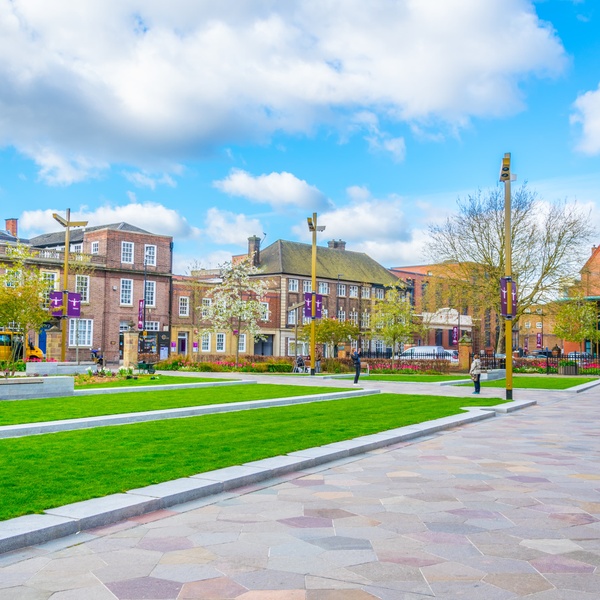 Want something fun to do in Leicester? Check out our guide to the best and unusual pla...
Read Article 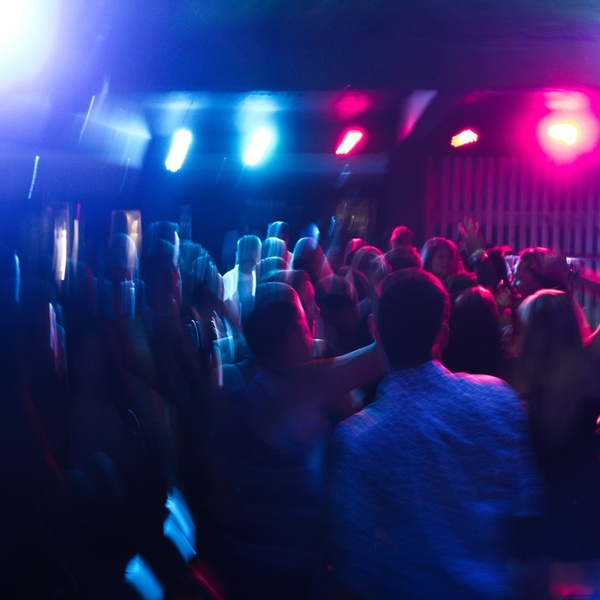 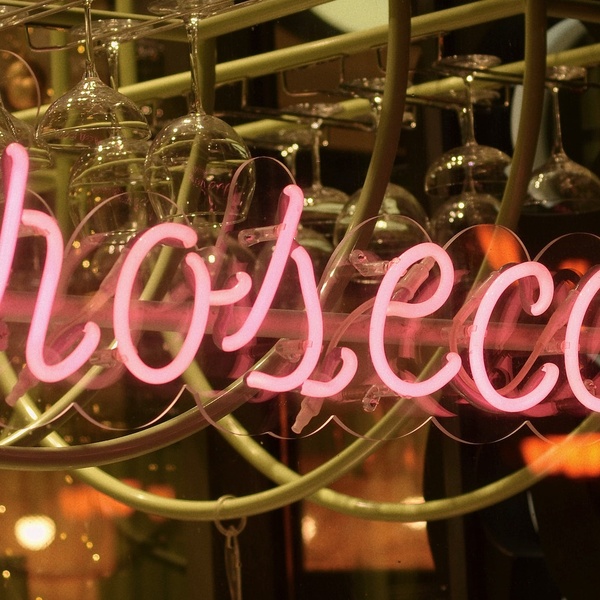 We’ve rounded up some of the best spots to enjoy a boozy, bottomless brunch in Leicester, and b...
Read Article 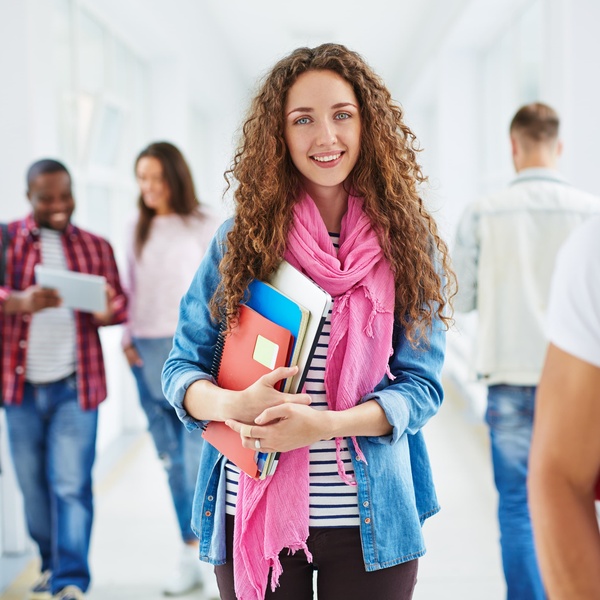 From where to find it to the services on offer to all students, we’ve rounded up eve...
Read Article 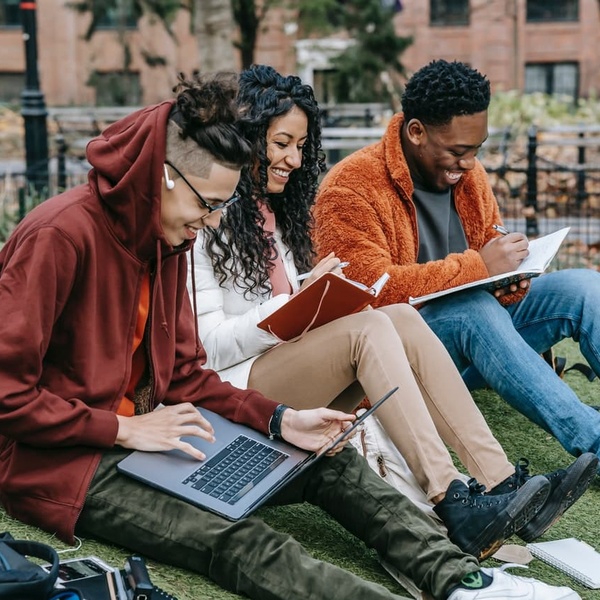 Whether you’re looking to attend Leicester University or De Montfort, we’ve put together ever...
Read Article

Check out our quick and easy guides to university in Leicester, as well as events and activities for students, and let us help you make the most out of student life in Leicester.